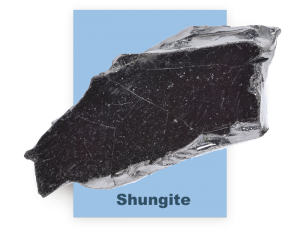 Shungite is a mineral that comes from Karelia Russia and no where else. It is said to contain all of the energies and medicinal properties of all of the crystals. One unique aspect of Shungite are the fullerenes. Fullerenes is what makes up the unique structure of this mineral giving it the ability to aid humans in very aspects of our lives. Within Shungite the fullerenes are known as buckyballs.

This mineral has the ability to clean and purify water which  is due to the fullerenes.  By placing Sungite in water the fullerenes both attract and neutralize contaminants found in water, which include the following.

This is possible due to the ability of the fullerenes within the composition to maintain a high amount of hydrogen. Shungite has been documented to have a high oxidative diminishing ability. Once water has been purified by Shungite one is left with water which contains powerful antioxidant properties.

While there is no proof of what I am about to say here I believe in going with your intuition. We have a Berkey water purifier, but I don’t just want the water purified I want the energy of Shungite. This energy does multiple things it aids with aligning my energy field along with healing my body. We have 6 pieces of Shungite in our Berkey water filter which I use to make the Kombucha I sell at the local farmer’s markets. People have come to me saying that they can feel a difference in their bodies when they drink the Kombucha I make verses store bought. I have been told I should put it in stores, but then I have to add preservatives to it and stop the fermentation process. This in my opinion does not allow one to benefit from all the benefits Kombucha offers our bodies.  So, with this being said 3 is the magic number when it comes to using Shungite nuggets. If you feel led to use more do so.

Using Tap Water from a City or Town

If you are using tap water from a city or town I recommend letting the water with the Shungite in sit of 24 hours before drinking. U

Personally I don’t care what manufactures say about their water or the label I don’t trust it. If you feel good about using bottled water let the water sit with the Shungite in it for 24 hours. Plastic bottles have BPA (bisphenol A) a chemical used in various products known to be a contributor for some in various negative ways. BPA breaks down after time leaching into the water, being in a hot truck during transportation or in a hot storage facility also causes the BPA to leach into the water.

I have talked with various pet owners who say they put Shungite nuggets in their pets water bowl and have had another water bowl without the nuggets and the pets always go for the Shungite water.

There are two types of electromagnetic field, the natural one within our bodies and the synthetic variations which exists in anything that is electronic or uses electricity to operate. When electricity first made its appearance it was noted that many people experienced negative effects in their bodies. While I am not sure at the time they made the connection it is noted at this time by those who care. Some of the effects people experienced were flu like symptoms and headaches. However, there are more effects that have now been realized stem from being exposed by harmful EMFs. The main reason this occurs is because our natural electromagnetic field is created to spin clockwise. This is represented through out our body including all of our cells and blood. Due to all the synthetic EMFs we are bombarded by our electromagnetic field spins counter clockwise. What the Shungite does is corrects our bodies making everything spin clockwise again, thus aiding with preventing certain issues stemming from the counter clockwise spin.

Below is only some of the negative ways we are effected by synthetic EMFs.

As mentioned above Shungite allows our natural electromagnetic field to spin clockwise as it should. In my opinion wearing Shungite is the best protection, but some maybe uncomfortable with something around their neck or wrist. If this is the case one can always carry 3 nuggets in their pocket. Place a bag with nuggets on TVs, gaming systems, microwaves, refrigerators, computers, etc.

If you have a smart meter on your house do not put beds up against that wall. Keep baby monitors at least 5 feet from the crib. Try not to place beds, chairs or couches on walls where the refrigerator is on the other side or other appliances. Be sure to place any electronics 5 feet or more away from the bed including cell phones.

Other Ways to Use Shungite

Plants love Shungite, water with water or just place the nuggets in a glass bowl near plants.

There are no reviews yet.

Be the first to review “All About Shungite” Cancel reply